This decadent low carb Cheesecake Peanut Butter Brownies recipe makes it so you don't have to decide between chocolate, peanut butter, and cheesecake! The rich, fudgy chocolate brownie base is made with peanut butter, and then topped with rich and creamy no-bake peanut butter cheesecake. The best part is, each serving has just 7g net carbs!

Back in the day (before I started eating low carb, lol), Adam’s Peanut Butter Cup Fudge Ripple Cheesecake from The Cheesecake Factory was one of my favorite desserts.

It was my go-to dessert there. After trying it, I don’t think I ever ordered a different kind of cheesecake! But after going low carb, it was of course out the window.

There's just something magical about the peanut butter + chocolate combination, especially if cheesecake is involved!

I’m a firm believer that low carb and keto desserts are a great tool to help keep you on track. I wanted to come up with a recipe that simulates that deliciously sugar-crazed chocolate peanut butter cheesecake, and these low carb Cheesecake Peanut Butter Brownies do a great job!

I used my Almond Butter Brownies as the base for these Peanut Butter Brownies. I basically just swapped out peanut butter for almond butter (both work great here!). And then the real fun begins!

All I know is that it’s a little over two cups worth of peanut butter cheesecake bliss sitting atop chocolate brownies. I’m telling you, that’s a lot for just an 8 by 8-inch pan, lol.

That’s why this is the perfect dessert if you can’t decide whether you want cheesecake or brownies. Or peanut butter, for that matter!

From personal experience, I’ve noticed that baking with peanut butter can sometimes lead to dry baked goods. In order to yield a deliciously moist result, it’s important to include other ingredients that lend moisture to a recipe.

In this Cheesecake Peanut Butter Brownies Recipe I use avocado oil and extra egg yolks so the resulting brownies aren’t dry at all.

In this recipe, almond butter works as a great substitute for peanut butter. Look for unsweetened runny almond butter (I like Costco’s Kirkland brand), and use the same amount (½ cup for this recipe).

You can also substitute sunflower seed butter for peanut butter in this brownie recipe.

In addition to sweetness, sugar adds bulk, helps yield the right texture for baked goods, and also helps with browning. When you take sugar out of the formula, baking can get a little tricky!

These low carb brownies are sugar free, and are sweetened with a combination of Swerve Confectioners and stevia glycerite.

I like to use a combination of these two sweeteners because the stevia helps reduce the cooling effect of erythritol that’s in Swerve Confectioners. Also, the erythritol helps cut the bitterness that stevia can sometimes have.

It’s literally the best of both worlds in terms of flavor, and bonus, using these sweeteners instead of sugar helps keep the carbs down quite a bit. 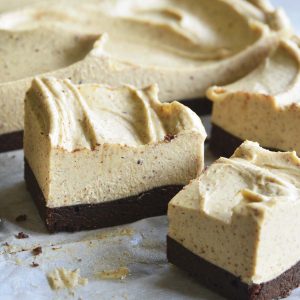