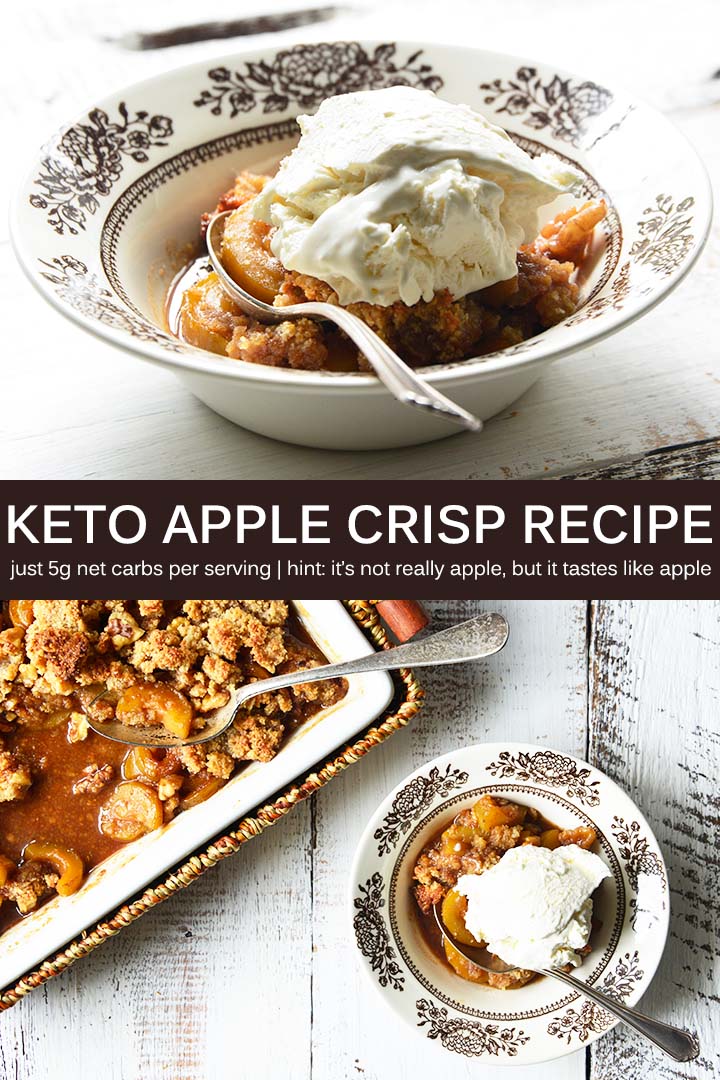 This Low Carb Keto Apple Crisp has a sweet, juicy, and aromatic cinnamon-spiced apple filling with a nutty crumble topping, and just 5g net carbs per serving. It’s the stuff your fall dessert dreams are made of! (Spoiler Alert: There are no apples in sight; read on to see the secret ingredient!)

I’m an apple girl through-and-through, and I'm a little picky about my apples. (I blame the fact that New York’s amazing apples spoiled me from the beginning, lol!)

I love a sweet/tart crisp apple eaten out-of-hand, sliced into a green salad, added to homemade breakfast sausage, and as the star of the show in a savory chicken dish.

And I’m a sucker for an apple dessert! My mom makes the world’s best apple pie, and I make a pretty mean apple crumble. Baked apples are also one of my specialties, and I make a quick 5-Minute Cinnamon Pecan “Baked” Breakfast Apple for busy mornings!

But as far as fruit goes, apples are unfortunately fairly high in carbohydrates. I’m not saying that apples are unhealthy (I love apples and eat them regularly!), but when you’re trying to keep your carbs down, it’s good to have a few options.

You will be shocked at how much this Keto Apple Crisp recipe using zucchini tastes like a regular apple crisp. Make it for your friends and family and unless you tell them what’s in it, I don’t think they’ll guess.

This is the perfect addition to your holiday dessert table!

The Inspiration for This Keto Apple Crisp Recipe

A few years ago (circa 2012) before I moved away from Buffalo, a friend of mine gave me a recipe for Zucchini Crisp. It wasn’t low carb or keto friendly, it just substituted zucchini for apple because she had a ton of zucchini growing in her garden!

(Side Note: One of the best things about being a food blogger is that people give you food and food-related gifts! Even more than a plate of cookies or a bowl of stew, I love when people share their family’s heirloom recipes with me. What an honor.)

As far as fruit goes, apples are fairly high in carbohydrates. If you’re trying to maintain a state of nutritional ketosis (keeping your net carbs around 30g per day, or whatever your personal macronutrient requirements are), you can eat a portion of apple and still stay in ketosis. However, just like with anything else, you have to be mindful of portion size.

The portion of apple that you can eat and keep your carbs within your desired range will be relatively small. This is especially true when you compare the portion of an apple with the portion of a lower carb fruit, such as raspberries, which are much lower in carbs.

Check out this article on keto basics on The Keto Queens to read more.

The Takeaway: You can fit any food into a ketogenic lifestyle if you eat a small enough portion of it!

According to the USDA Food Database, 1 medium (182g) raw apple has the following nutrition information:

How ironic that this version of low carb apple crisp doesn’t have a single apple! It’s a mock apple crisp, and you’ll be surprising at just how close it tastes to the real thing.

How to Make Apple Crisp – The Keto Way!

To use zucchini to simulate apple in this delicious dessert, we first have to make zucchini look as close to apple as possible. We eat with our eyes first, right?

Pro Tip: Look for smaller, more narrow zucchini for fewer or no seeds!

When the zucchini is peeled and sliced, it should look like this.

Combine the zucchini, lemon juice, sweetener, and a few other flavorings in a saucepan and cook it down on the stovetop.

Then transfer the zucchini filling to a casserole dish.

Now it's time to make the crumble topping!

This couldn’t be easier; cut the butter into the dry ingredients with a fork.

Sprinkle the crumble topping on top of the filling, and bake until it’s golden and bubbling.

Serve warm and revel in the fact that low carb is pretty darn delicious.

And if you really want to take it to the next level and gild the lily, serve it topped with a scoop of Cheesecake Ice Cream!

What is the Difference Between Apple Crisp and Apple Crumble?

These two apple-based treats are very similar! They both contain an apple filling with a streusel topping. However, apple crisp topping traditionally contains oats, while apple crumble topping does not.

Read more about the difference between a crumble and a crisp on The Kitchn and Taste of Home.

Can You Freeze an Apple Crumble?

Yes, you can freeze apple crumble and apple crisp either before or after baking.

To freeze apple crumble or apple crisp before baking:

To freeze apple crumble or apple crisp after baking:

How Long is Apple Crisp Good For?

After the first day, move this to the fridge to extend its shelf life. If stored covered in the fridge, apple crisp stays good for about 3 to 5 days.

The same thing for this faux Keto Apple Crisp, it should stay good covered in the fridge for up to 5 days. 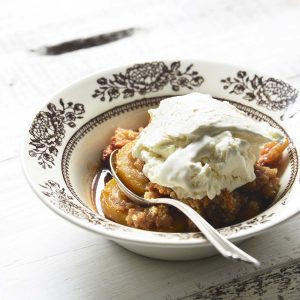