This nutty, creamy, and crazy delicious keto Watergate Salad recipe is a rich, flavorful pistachio cheesecake mousse with pineapple and cherries. It will transport you right back to the summer potlucks of your youth!

Summer potluck foods are some of my most memorable childhood food memories.

There was my mom’s famous baked beans, for starters. And her taco salad. And her creamy mayo-based dressing for topping tomatoes right out of the garden.

My grandma on my dad’s side made this sort-of pineapple slab pie with vanilla frosting that was topped with almonds and cherries, which sounds weird as heck, but was actually pretty fabulous.

And on rare occasions, some kind of ambrosia salad would turn up. It was usually brought by a distant relative, no one in my close family made it. The minty green-colored one with the nutty flavor was always my favorite...the Watergate Salad!

Remaking this classic sweet treat into something that’s a bit healthier has been on my list of things to do for quite some time now. But I was making it overly complicated.

I wanted to come up with a from-scratch (healthy) recipe for every component: pistachio pudding, cool whip, marshmallows, etc. What a process!

For this recipe, I use a base of cream cheese with whipped cream folded in to give it a mousse-like texture.

It’s flavored with fresh pineapple (a little goes a long way), vanilla, almond extract, and pistachio. You can add shredded coconut to really take it over the top.

This keto recipe has just 6g net carbs per serving (remember net carbs = total carbs – fiber) if you make it with keto sweetener. And if keto sweetener isn’t your thing, honey is delicious and you only need a touch!

How to Store Watergate Salad

Store this treat in an airtight container in the fridge for up to 3 days. Note that it will stiffen slightly, but still have a mousse-like texture.

Variations on this Watergate Salad Recipe

What is Watergate Salad?

This is a type of dessert salad (also served as a side dish) similar to ambrosia. It’s usually made out of pistachio pudding mix, whipped topping, canned pineapple, and marshmallow.

It’s a popular treat to bring to potlucks in Mid-Western and Southern states of the US.

Why is it Called Watergate Salad?

One of the things I find most interesting is the intermingling of culture and cuisine. That’s the case with this salad. It's the stuff urban legends are made of. Like any good mystery, the rumors floating around are what make it intriguing.

Rumor has it that after that, a Chicago food editor renamed it “Watergate Salad” to promote interest, and the name stuck. (Although both the editor and article are somehow unable to be located.)

In June 1976, the Denver Post published a recipe for Watergate Salad, supposedly dreamed up by a sous chef at the Watergate Hotel.

It’s been said that the name of this salad comes from “Watergate Cake”, which is also full of nuts.

Both the salad and cake came out during the time of the Watergate scandal in the 1970’s. Although there isn’t a direct relation between these recipes and the political scandal, one theory on the origin of the naming of these dishes makes a correlation: cover up whatever is inside and tuck it away!

This is because Watergate Salad is a mix of a bunch of things, covered, and then put in the fridge. Similarly, Watergate Cake has a “cover-up” icing and is topped with nuts.

Who knows which (if any) version is true, but they sure do make this recipe interesting! (You can read more about Watergate Salad on Delish, Serious Eats, and Wikipedia.) 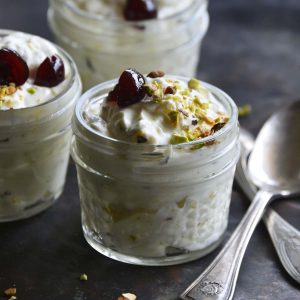