This keto sugar free caramel sauce recipe has rich, buttery caramel flavor with a hint of vanilla. It has just 1g net carbs per serving and takes less than 15 minutes to make; you’ll want to drizzle it on everything!

Imagine sitting down to a decadent caramel brownie sundae.

There’s a fudgy, rich chocolate brownie as the base.

The brownie is topped with a generous scoop of velvety ice cream flecked with vanilla beans.

Cascading down the ice cream is none other than this luscious keto caramel sauce.

A beautiful dollop of freshly whipped cream adorns the top.

I’m not saying that keto is all about indulgences, because it’s not. It’s about quality fats, low carb produce, organic grass-fed meat and dairy.

But sometimes a girl just wants to have her caramel brownie sundae and eat it too. And stay in ketosis. Right?

I know the idea of low carb or sugar free caramel sounds a little silly because caramel is just burned sugar! However, with the fabulous sugar substitutes that are available on the market today, keto or low carb caramel sauce isn’t as crazy as it first seems.

What is Sugar Free Caramel Made Of?

Regular caramel is made by caramelizing – that is, burning – regular sugar. To make caramel sauce, the burned sugar is combined with butter and cream, and sometimes other flavorings, such as vanilla and salt.

Sugar free caramel sounds like an oxymoron; how can we have caramel when caramel is inherently sugar?! That’s the magic of low carb and keto cooking, my friends. Sugar free caramel uses a keto-friendly sugar substitute, and of course keeps the butter and cream.

In this recipe for keto caramel sauce, we use a combination of granulated erythritol (which caramelizes like sugar) and stevia glycerite for sweetness. I don’t consider this caramel to be truly sugar free because I include a touch of blackstrap molasses, which contains sugar.

But if you want a sugar free caramel sauce with as few carbs as possible, you can omit the blackstrap molasses in this recipe.

How to Make Keto Caramel Sauce

Do Sugar Alcohols Count as Carbs on Keto?

In general, sugar alcohols have less of an impact on blood sugar because the gut doesn’t fully absorb them.

Because of this, sugar alcohols are typically subtracted from total carbs (along with fiber) to determine net carbs.

Stevia is a non-nutritive sugar substitute. (Non-nutritive means that it has almost zero calories.) It tastes about 200 times as sweet as sugar.

Stevia is extracted from the leaves of the plant species Stevia rebaudiana, which is native to Brazil and Paraguay.

For the most part, stevia has a very intensely sweet flavor. However, it can also have a bitter aftertaste at high concentrations that some people can detect more easily than others.

Stevia can replace sugar to sweeten many different things, such as:

Stevia can also be a good choice for baking. However, it requires a bit of finesse because it doesn’t act the same way sugar acts.

Stevia is much sweeter than sugar, so not only will you have a sweeter flavor if you don’t compensate, but you also won’t have the bulk that sugar adds when baking.

Additionally, stevia doesn’t brown the same way sugar does. Because of this, if you’re not familiar with baking with stevia, I recommend following a recipe as-written that has been tested if it calls for stevia.

Can You Caramelize Stevia?

No, stevia will not caramelize the way sugar does.

How Do You Make Caramel Sauce with Stevia?

Because stevia doesn’t caramelize, if you want to use it to sweeten sugar free, low carb, or keto caramel sauce, I recommend using stevia in combination with another sweetener, such as erythritol or allulose.

I like to use either a stevia/erythritol blend or a stevia/allulose blend to make perfect keto caramel sauce.

Erythritol is a sugar alcohol with negligible calories and carbs, which is frequently used as an alternative sweetener to sugar. I talk more about what erythritol is in my post on Vanilla Bean Low Carb Cheesecake Frosting.

Erythritol is about 70% as sweet as sugar. The issue with erythritol’s flavor is the fact that it can have a slightly cooling effect. The best way I can describe it is a menthol or peppermint-like effect.

How to Reduce the Cooling Effect of Erythritol

Through a lot of experimentation, I’ve found that there are two ways that work fairly well to reduce the cooling effect that erythritol can have:

Yes, erythritol caramelizes and browns like sugar. This makes it a very good option to make low carb caramel sauce!

Allulose is a type of low-calorie sugar that's similar to fructose. It's found naturally in certain foods, including wheat, corn, figs, raisins, and jackfruit. Allulose has about 1/10 the calories of cane sugar.

You can read more about allulose on Medical News Today, HealthLine, and U.S. News & World Report.

Similar to erythritol, allulose is about 70% as sweet as sugar. This means that for every 1 cup of cane sugar, you will need 1 ⅓ cups of allulose to get the same sweetness level.

However, unlike erythritol, the benefit of allulose is that it doesn't have a cooling effect.

Yes! If you want the PERFECT keto caramel sauce, allulose is the way to go. Allulose caramelizes like sugar, but doesn't have a cooling effect and doesn't crystallize.

Above: Perfect Keto Caramel Sauce - Made with Allulose! As you can see, it's a little thicker and a little darker in color than keto caramel made with erythritol.

How to Use Perfect Keto Caramel Sauce 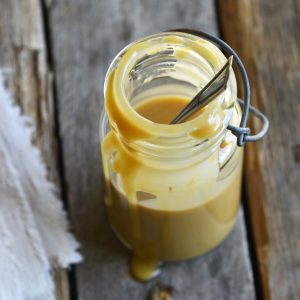 This post was first published on Healthy Sweet Eats on January 17, 2019. It was updated with more information on September 19, 2021.