Almond Butter Brownies are rich, fudgy, and deeply chocolaty! You’ll be surprised that the batter has half a cup of almond butter because you can’t taste it. Each brownie has just 2g net carbs per serving!

I’ve experimented with almond butter-based brownies more times than I can remember!

Either they ended up with the wrong flavor (too much like almond and not enough like chocolate), or the wrong texture. There is no place for rubbery brownies, cakey brownies, or cardboard-y brownies in my world, lol.

About a year and a half ago I was at the point where I thought the perfect almond butter brownie was a myth, or at least something that was completely out of my reach. That is, until recently when I had a stroke of inspiration!

Instead of trying to use a gluten free flour, such as coconut or almond, what if I skipped the flour altogether? Using my Classic Chocolate Walnut Brownies as inspiration, and with almond butter and unsweetened cocoa powder as the base, this recipe finally nails the right flavor and texture.

These Almond Butter Brownies are densely fudgy with deep chocolate flavor and they don't taste like almond butter! And in addition to being gluten free and grain free, these brownies are also low carb and keto friendly with no added sugar and just 2g net carbs per brownie.

Finally an almond butter brownie recipe I am completely on board with!

When it comes to brownies, I like mine with deep chocolate flavor and rich fudgy/slightly gooey texture. And of course, there’s no room for healthy flavors, like avocado, black beans, or even almond butter. You can add healthy ingredients to brownies, but I don't want to taste them, lol.

Brownies should takes like chocolate. Period. And these do!

There are a lot of gluten free brownie recipes out there. They use different healthy ingredients instead of flour to get the right texture and consistency.

The good thing about healthy brownies is that you can easily bump up the vitamins, minerals, fiber, and/or protein depending on what you add.

I know it might sound weird to add a vegetable to brownies, but sweet potato is actually a pretty delicious addition! Sweet potatoes lend a natural subtle sweetness and add earthy richness to brownies.

You won’t be able to pull out the flavor of sweet potato at all because it blends flawlessly into sweet potato brownies.

Avocado is basically the butter of the vegan world! In brownies, avocado adds creamy richness and fudgy texture, and also bumps up the nutrition and adds healthy fat.

The flavor of avocado is usually just faintly noticeable in recipes for avocado brownies.

Ugh! This is the oddball healthy brownie recipe I refused to try, even in its peak of popularity a few years back. The notion of beans in brownies is just so strange to me. And perhaps even unappealing (maybe it’s just me!).

But a lot of people claim that you can’t taste the beans, which makes me think I need to try black bean brownies for myself! And of course they boast bumped up fiber and protein from the beans.

If you thought adding sweet potato to brownies was weird, cauliflower is even odder! I mean, cauliflower is a (smelly) cruciferous vegetable, and it kind-of goes without saying that it has no place in dessert. But I’m intrigued.

I’ve heard that cauliflower brownies have a cauliflower flavor in the batter before baking, and as they bake you’ll smell cauliflower. But then once they’re cool, no more cauliflower taste/smell! Sounds like magic to me. 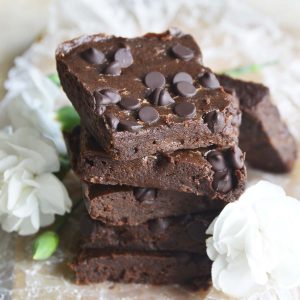